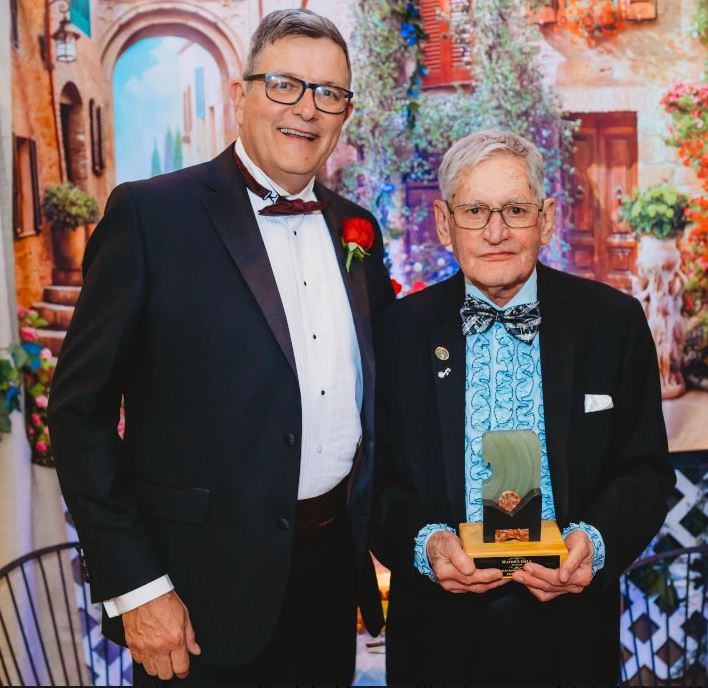 Michael is pretty passionate about music. We are so proud to have him in our midst. After a potluck dinner with their musical friends, Michael’s wife June was clearing dishes with Cvetozar Vutev. An idea formed for an orchestra to accompany the choir he was leading. Vivace Chorale and the Kamloops Brandenburg Orchestra performed Bach’s Christmas Oratorio in 2012 to a sold out audience at St. Paul’s Anglican Cathedral. The Kamloops Brandenburg Orchestra has presented works three times a year ever since.

We were all so proud when Michael was nominated for the Kamloops Mayor’s Award for the Performing Arts, in the category of Enduring Supporter of the Arts. He is a tireless example of support both as a player but behind the scenes organizer of communications, advertisements, and an infectious commitment to music in Kamloops. We were so proud as Michael gave one of the best acceptance speeches of the night.

I am very happy to say that my Uncle, James Verity was the first Conductor of the Kamloops Symphony. The Symphony Society was formed in 1976 and presented the premiere performance of KSO in December of that year. Forty-four years later, I still play the cello in KSO.

It was rather dangerous to be sitting that close to the viola section in those days. I ended up being married to one of the violists. June is with me tonight as one of my Enduring Supporters. In fact, it eventually became a family affair, with my twin sister’s husband, Alan Reed and his son and daughter all playing in the French Horn section.

Born in Jamaica, British West Indies, I am the youngest of fraternal twins. I received my musical training from my piano teacher mother and singing Welshman father. I moved to Canada in 1967 and to Kamloops in 1970 where I worked for the Kamloops Library.

My wife and I are founding members of three Kamloops orchestras, Kamloops Symphony, Thompson Valley Orchestra and The Kamloops Brandenburg Orchestra and of course Ordinary People , a string and flute ensemble. We perform several concerts per year for Care facilities in Kamloops . I am proud to be one of the three founding members still playing in KSO. I share that honour with Irene Whitfield and Annette Dominik.

I am honoured to have been one of the finalists of this award and pleased to accept it. Thank you again. I will try my best to live up to the honour for the remainder of this year.