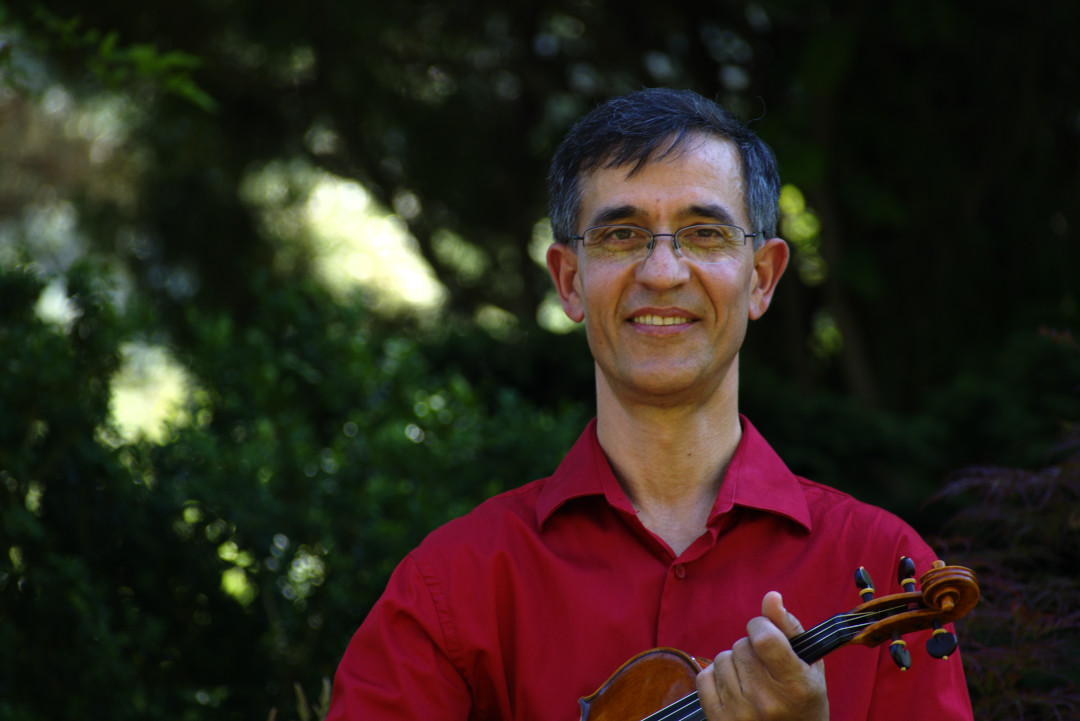 Cvetozar Vutev has served as concertmaster with the Kamloops Symphony Orchestra and has taught violin, viola, chamber music, and string orchestra with the Kamloops Symphony Music School since 2005. He has also served as concertmaster with the Symphony of the Kootenays since 2016. Cvetozar has been a first violin core player with the Okanagan Symphony Orchestra since 2010.  He held the position of music director of both Vivace Chorale Kamloops from 2007-2020, and Kamloops Brandenburg Orchestra since 2012. He has been a choir instructor of Thompson Rivers University Chorus in Kamloops since 2013.

Cvetozar achieved a master’s degree in violin performance under Boyan Lechev at the Pancho Vladigerov National Academy of Music in Sofia, Bulgaria in 1990. In 2016 he achieved a doctorate in musicology and musical arts at the same institution. Cvetozar attended violin master classes taught by Yfrah Neaman (UK) and Wolfgang Marschner (Germany). He also studied choral conducting under Lilia Gyuleva in Sofia, and the UBC Vancouver professor Graeme Langager. In 2000 Cvetozar earned a master’s degree in law at the Kliment Ochridski University of Sofia, Bulgaria. In 2017, he received the Mayor’s Award for the Arts – Artist of the Year: Performing Arts in Kamloops.

Cvetozar Vutev was born in Pleven, Bulgaria. He started taking violin lessons at the age of 6, piano lessons at the age of 12, voice and conducting lessons at the age of 16. In 1983 he graduated the Panayot Pipkov State School of the Arts, with a concentration in violin under Krasimira Kuzeva and choral conducting under Ivet Glojenska. From 1980 until 1983 Cvetozar was a member of the Pleven Youth Choir, and from 1983 to 1985 he sang with the Sofia Youth Men’s Choir. While a first violin player with the Sofia Symphony Orchestra, Cvetozar attended four master classes in symphony conducting under world famous conductors such as Ferdinand Leitner, Gennady Rozhdestvensky and Valery Gergiev at the Accademia Chigiana in Siena (Italy) between 1989 and 1993. In 2003 he took part in another symphony conducting master class under Salvador Mas-Conde in Vienna (Austria).

Over the years Cvetozar has been the concertmaster of Opera “Passion” Milano, Italy, Orchestra Century 21, Sofia (Bulgaria), Opera Kelowna, Prince George Symphony Orchestra, and others, as well as a member of the Rousse, Vratsa and Vidin Symphony Orchestras, Orpheus Chamber Orchestra, Sinfonietta Sofia Orchestra , National Opera and Ballet Orchestra (Bulgaria), Operettenbuene, Vienna (Austria), Opera Manhattan (USA), and others. In June 2019 he has conducted the performance of the contemporary opera “Maria Chapdelaine” by Jim Leonard in Vernon, BC. Cvetozar has more than 30 years of violin teaching and performing experience. He has done numerous soloistic, chamber, symphony and opera performances in Germany, Italy, France, Spain, Austria, Holland, Denmark, Switzerland, Greece, Serbia, Macedonia, Bulgaria, Rep. of Korea, Japan and Canada.